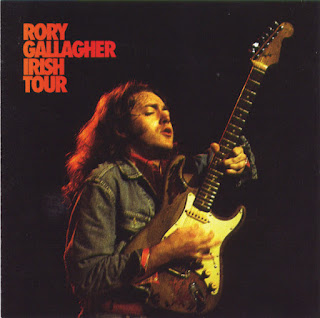 I had a shock last week when I pulled out the album that today's track is from and realised that I had owned it for thirty six years! One of the best live albums from one of the most underrated guitarists ever. Also from an album recorded in parts somewhere that not too many people would go to back in the early 70s. Rory Gallagher did not ignore his many fans on both sides of the divide during "the troubles" and played Northern Ireland all through the 70s.

An extremely talented guitarist who sadly died way too soon.

Rory Gallagher - Walk On Hot Coals
Posted by drew at 08:00

I saw Rory Gallagher a couple of times in the 1970's and the standout live track for me was "Going to My Hometown". Love his first solo album - an absolute must have for any music fan.

It's worrying how the years rack up isn't it? It used to shock me to realise that I owned records that had been in my collection for 20 years, but suddenly there are LPs that have been with me for 47 or 48 years - these are big numbers! I was lucky enough to see Rory live once too - and that was around 45 years ago.... Pass me my zimmer frame.