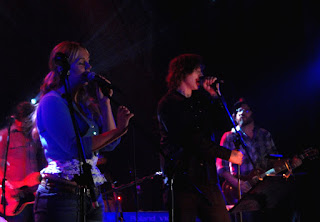 I have eventually found a copy of the deluxe version of Sunday At Devil Dirt by Isobel Campbell and Mark Lanegan. I have been on the lookout for a copy of this at a decent price as the extra disc comprises of tracks recorded at the Shepherd's Bush Empire in January 2007 and especially a version of the Nancy and Lee classic, Sand. I had been bowled over two nights prior to the London show by the performance of this, possibly my favourite track by that most incongruous of pairings, Nancy and Lee that is, although Isobel and Mark would be a close second but both proved to be almost magical pairings but I digress. Therefore I was really looking forward to hearing this again but was slightly disappointed as it sounded a bit flat, not bad but just not nearly as good as I remembered, I'm not sure if I am misremembering or they just didn't get it quite right two night later when it was recorded.

Isobel Campbell and Mark Lanegan - Sand
Posted by drew at 10:26

Maybe one of those you had to be there moments Drew

Looking forward to listen to this when I get home - but will it really be better than the Einstürzende Neubauten - version? I strongly doubt that!

I don't have the other show to compare it to, but this is completely working for me. No, it doesn't quite match the tension of the original, but very well done for a live version. I'm not saying the take by Einstürzende Neubauten smells, but it is a different kettle of fish.