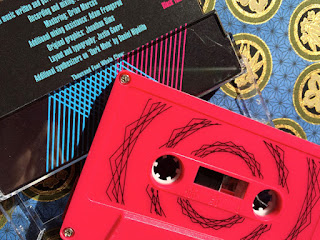 Today's drawn-out piece of music comes from one of the three things I've bought on tape in the last twenty, possibly closer to thirty years. It was purchased on that less than optimum medium out of necessity as somebody either from having a fetish for the format or I suspect probably more likely from their judgement being impaired though heavy weed use decided that that was the best way to release, Cosmic Winds,  the third long player by Thousand Foot Whale Claw, the previous release was similarly formatted.

I first got into the Austin Texas experimental drone merchants when I took a punt on their first album Dope Moons Vol.1 which was released on the far more sensible vinyl format, I believe that there was also a cassette version which came later but we will not dwell on that. They produce music to get lost in, ambient, stoner tunes that remind me of the stuff that Pete Namlook was doing with his Air project back in the early 90s.

A fourth album was released at the tail end of last year but I'm ashamed to admit that I have only played it a couple of time but from what I can remember it is in a similar vein and also very good.

It is fantastic to hear one of their songs in this series. I really love them since a couple of years, Drew, and it is always a pleasure to come back to their Arizona based psychedelic sound.

I, like you by the sounds of it, have a small pile of cassettes gathering dust in a corner of my room. I would've been happy with downloads for most of the titles, but for an extra quid or so here and there, I acquired tangible artefacts as well - not sure what I'm going to do with them in the long run though.
I enjoyed 1000 Foot Whale Claw tremendously. I don't know if 'Cosmic Winds' is typical of their oeuvre, but it brought to mind a slightly heavier Tangerine Dream - which is no bad thing in my book. I shall be investigating further.