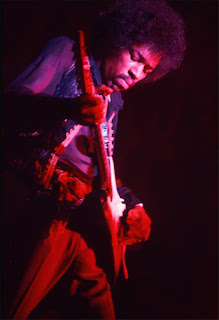 On the 10th/11th/12th of October 1968 the Jimi Hendrix Experience played 6 shows at the Winterland Ballroom in San Francisco in 1987 a selection of the tracks from these performances was released on a double album and from these you could tell that the Experience were at the peak of their powers at the time of this mini residency, with absolutely brilliant versions of Purple Haze, Killing Floor, Fire amongst others, however the full power of the performances didn't come to light until 2011 when a 4 cd, 8 album version of these nights was released which absolutely blew me away not least the two epic versions of my favourite Hendrix cover, Like A Rolling Stone. I never thought that Hendrix could surpass the version recorded at Monterey Pop in 1967, and in a way he didn't as the versions from Winterland are a lot bluesier less angsty than the earlier version, they are also a lot longer.

I was introduced to Hendrix at the age of eleven by an older guy called Jim Loughrey and was instantly hooked by what I heard and nearly forty years later I am still in awe of the noise that Hendrix managed to get out of a Fender Stratocaster (mostly). Not being musical at all I find it impossible to understand how, no matter how so many people have tried over the years, I have never heard anyone who can make a guitar sing like Hendrix can.

I've never previously heard this version and it's absolutely terrific. The slower pace really does suit the song. What a revelation. Thanks for digging this one out Drew.

Wow! I didn't heard this version before and it absolutely fantastic. You are right - they were at their peak. Mindblowing and far of everything in these days. I was also introduced to Hendrix at my very young day by a couple of older mates and I felt strange when I saw them sitting on an old sofa listening to this music in full noise and smoking their stuff. But from these days I can't get rid of Jimi. Thanks for giving us this gem.