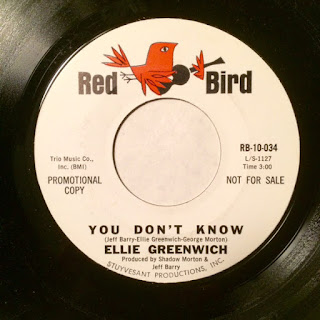 Ellie Greenwich is responsible for some of the greatest moments in pop music, there can be no dispute about this it is just a fact. Whether that be with her one time husband Jeff Barry and Phil Spector or later, on her own. She was also responsible for a single that inexplicably bombed in 1965.

Greenwich very rarely recorded here own material but in 1965 she released a single containing two absolutely sublime songs, the up tempo Baby which was later claimed by the northern soul scene and has therefore been bootlegged and is possible to get a hold of on vinyl. The other side, the heart wrenching You Don't Know on the other hand is only available these days on a couple of compilation albums as the original Red Bird single is impossible to find. Shadow Morton's production is nothing short of perfect on this song.

Love it. It must've been tempting to end on another belting crescendo, but the way it just fades into the distance is perfect.