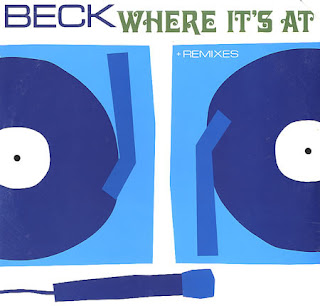 I never really got into Beck, I liked a few things and of course bought Odelay, I'm sure it was compulsory back in 1996,  but I purchased the 12" of  Where It's At solely for the U.N.K.L.E. mix,  back in the mid 90s I was obsessed with all things Mo Wax so much so that I had every release from MX014, my introduction to MW069, after which I began to get a bit more selective and only bought the UNKLE releases on the label. Unfortunately I only have 12 left, all the others going in the great iPod funding sell off that still causes me cry every now and then but I digress and if I think about this any more I will only get really depressed.

The original of Where It's At is pretty good to be fair and was produced by the Dust Brothers but the U.N.K.L.E mix turns a three and a half minute slacker tune and turns it into a dark epic with some great beats and even better scratching. Talking about scratches, I can only apologise for the crackles on this, it was played a lot and possibly not treated as well as it should have been due to my lack of co-ordination when I had the urge to play this.

I also had a MoWax period, but I'm not sure what remains on my shelves from those days, this post has inspired me to take a look though. Good to hear this tune again - I can't imagine that it's graced my lug'oles since I played in the shop all those years ago. Bonkers last few minutes.