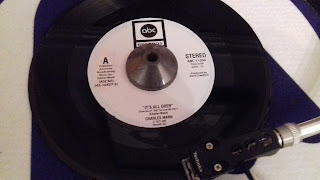 This is a gorgeous piece of Northern Soul that was big on the scene, especially in Cleethorpes in 1975 making it very nearly a new release, well a couple of years old only. It's All Over was released on the ABC label in 1973 and is one of those tracks that when I got into the music I kind of dismissed as it was not a four to the floor stomper, it's a lot subtler than that. Thank god that my tastes evolved as this is just so so good.

To these untrained ears, it is reminiscent of the sound of 70s Philadelphia.

Well done, I'm impressed. We'll make a Soulie out of you yet JC. The track was recorded at the Sigma Sound Studios in Philly