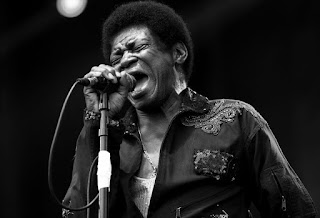 Returning home after an amazing night on Saturday at the ABC in Glasgow more of which later in the week I decided to take to Twitter to inform anybody who would take any notice of what a brilliant evening I had had only to be confronted with the sad news of the passing of Charles Bradley which  brought me down quite a bit. I'm pretty sure that it was due to Craig Charles that I first heard Bradley and I'm sure my first thought was that this guy was trying to sound like James Brown it wasn't until listening to more of the singer's output that I realised that that was only a part of his sound, there was also a bit of Otis in the voice but one thing that wasn't in any doubt was that the man could sing. He is probably best know outside of soul circles for his cover of Black Sabbath's Changes, which would also turn out to be the name of the Screaming Eagle of Soul's, third and final album.

Bradley worked as a cook for years but supplemented his income singing in clubs until the mid 90s when he returned to Brooklyn to be reunited with his mother and gig as a James Brown impersonator. He met Bosco Mann a co-founder of Daptone records who introduced him to Tom Brenneck who would go on to produce Bradley and with his band the Menahan BAnd would back the singer on his productions.

Here is another of Bradley's cover versions, although when I bought it I wasn't aware that it was originally by Nirvana and is apparently from the Nevermind album.

Charles Bradley - Stay Away
Posted by drew at 08:00

I noticed it on Sunday morning but couldn't finish a Tribute yet. Great words Drew.

What a life he had. I'm so glad that he lived long enough to find success and realise how loved he was.

Bradley was an outstanding performer who gave it his all at every gig. I bet Cobain would have loved this version of his tune. Yet another sad loss for music this year.

What? No way! How did I miss this? Gutted.