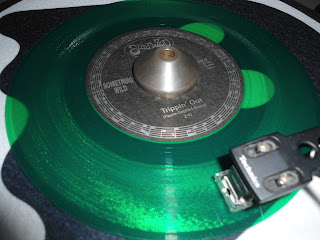 Something Wild started out as an R&B band heavily influenced by the Rolling Stones but as you can see from the title of today's track by mid 1966 the band's influences were coming from a different source, the Height-Ashbury  area of San Francisco to be precise where they would hang out as often as they could even although they were from Santa Maria some 250 miles away. Therefore they were getting more into the emerging psychedelic music scene and even called their label that Trippin' Out was released on Psychedelic Records just if anybody was still in doubt. The title of both the label and the record made radio play increasingly difficult as when any station did dare to play the record they were then inundated with complaints from parents saying that they were encouraging drug use, which lead to the record getting little to no traction. Which is a pity as it is pretty good especially the last 30 or o seconds of feedback wigout.

It made me holla it made me shout!