My World Is On Fire 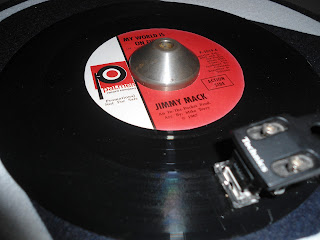 Is the Jimmy Mack who cut this single for Detroit's Palmer label in 1967 the same Jimmy Mack that Martha Reeves sung about and had bolted on her? I don't know, it's possible, could be,  as the identity of the singer on this record has never confirmed at one time it was thought that he was Jimmy McEachin, however that was ruled out as he worked on the West Coast in L.A. He was then thought to be a writer and singer out of Chicago. Whoever he is he should be saluted for recording such an excellent dancer and I hope that he is/was aware of how much esteem My World Is On Fire is held in on this side of the pond, making the lower reaches of the Northern Soul Top , number 459. No mean feat.

Great song and the drumming is out of this world. Love the little fill that leads back into the verse.