When All Else Fails Part Two 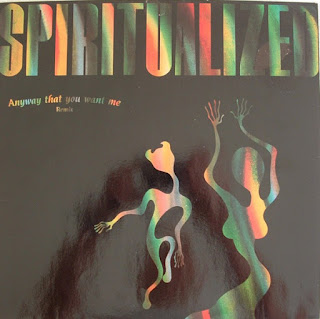 When we were leaving the ABC on Saturday night with our ears ringing a condition that would not subside until well into the following day, I turned to Stiff and said "I wish Spiritualized would tour again" and funnily enough Stiff had been thinking the same thing. You see the Jesus and Mary Chain gig nearly reached the decibel level of the last time we saw Jason Pierce and Co, in the same venue way back in March 2012.

So I thought today that I would post a remix of the first Spiritualized single, the Chip Taylor written classic recorded previously by The Troggs and Evie Sands. On this single J Spaceman and the band he put together after the demise of Spacemen 3 find themselves in a meditative laid back mood. The remix is not radically different from the single release other than Ian Caple has added beats and some spiritual samples. This is about as close as the Spaceman came to jumping on the "indie dance" bandwagon which was son prominent at the time, although I never read in any interviews Pierce stating that there had always been a dance element to his music.

Spiritualized - Anyway That You Want Me 3
Posted by drew at 09:14

Brian, it was even better than at the Barrowlands. Quite a few different tracks and the most malevolent version of Reverence ever, William Reid's guitar just sounded downright evil. It was wonderful. The place was packed. Not the same emphasis on Psychocandy as previous gig. Cherry Came Too and Sidewalking were great surprises. I am so glad that I changed my mind earlier in the year.

btw - Mugs are the new T-shirts

Love their version of this.

Sounds great all around, Drew. Not sure I want to lug a mug around though. Ha! I will keep an eye out for this development.