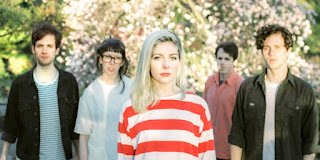 My list of records to buy doesn't seem to be getting shorter. It seems that on a daily basis I have to add something, yesterday it was the new Four Tet one which will be released at the beginning of October. I haven't been able to buy a pair of trainers for some months and had to forget the limited edition beer proof Adidas Prost which looked the business. It has also meant that the priorities keep changing as one more limited edition takes precedence over another, in turn bumping other things further back in the queue. One such thing is the second (see that, not sophmore as I am not American) album from Canadian band Alvvays which is quite annoying as from what I've heard it is even better than their debut. although I haven't heard anything that quite matches today's track.

You will probably find me bangoing on about Antisocialists ( a brilliant title) in about 18 months time the way things are going just now.

Hearing a lot from this new LP just lately on 6Music and it does sound very good. They played this session for Lauren Laverne too, in case you missed it http://www.bbc.co.uk/programmes/p05fdcnp

Seems like we had the same idea posting Alvvays today Drew

The Robster has been getting in on the act too

I had Alvvays slated for a post the same day Robster did. Can't get 'em out of my head. Drew, you went straight for their best song today. Will be tough to top.