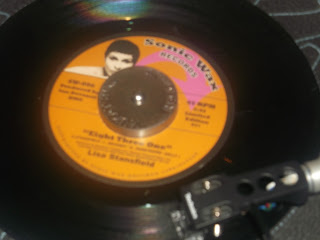 This was first posted four years ago but I played the single yesterday for the first time in ages and thought that it warranted another airing on the blog.

I had a bit of a crush on Stansfield back in the day when others were lusting over the likes of Harriet.

A couple of weeks ago I mentioned Lisa Stansfield in a modern soul post. Stansfield herself is responsible for a track that was huge on the scene, so much so that the track was bootlegged and released out on 7" vinyl. 8-3-1 was released as a cd single in 2001 and was one of the standout tracks from that year's Face Up album.

I once nearly met Lisa Stansfield, when she was at the height of her fame. I was returning from an exhausting week in Holland with sixty odd Primary school children. We had stopped at a service station when one of the girls spotted Stansfield returning to her coach which led to maybe a dozen girls rushing over. Stansfield was having none of it and quickly got into the coach. The kids were told to go away in very unambiguous terms by the Rochdale singer's "security" and they returned to hassling the staff at the service station instead. One girl turned to me and said " does she no know who we ir? an  she isnae Madonna onyways".

Would it have killed her to give the kids a little wave or something? Harriet would have been kinder, I'm sure.

One morning in 1983, Billy MacKenzie was spotted at Auchterhouse by school weans and given no option but to patiently wait on the verge in the rain with his whippets, while the entire Newtyle School Bus emptied, queued up to get his autograph and then got back on the bus. Late for Newtyle High School... but with autographed jotters.
Takes all sorts.