Get Off The Road 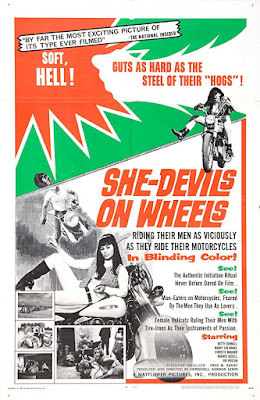 I appear to be having a problem with Wednesday's when it comes to this blog. I seen to have run out of steam by the middle of the week these days.

So when all else fails post a track by the Cramps. Get Off the Road is the final track from A Date With Elvis  and b-side on the 12" version of What's Inside A Girl. and finds Ivy taking over vocal duties on what  I always thought would make a great theme to a trash fifties film about a female biker gang and after a little bit of googling it turns out that it  was on the soundtrack to a film not a fifties movie but one from 1969 entitled "She- Devils On Wheels" directed by Herschell Gordon Lewis, an American "Splatter" filmmaker. I am not familiar with Herschell's oeuvre but from what I've just read it sounds as though this sort of thing would be regular viewing for Lux and Ivy.

You can never have too much Cramps.

When all else fails, post a track by the Cramps.
This should be the mantra for all bloggers.

Still one of my favourite bands.