Love At A Price 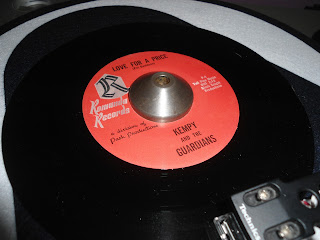 Love at a Price was the one and only single by Kempy and the Guardians , I know, seriously bad name by rights I should never have listened to this as the name suggests a particularly crap team of superheroes to me. Now, I don;t like to speculate but maybe the pish name chosen by the band from Oak Cliff, Texas had something to do with them only releasing the one single although they had two goes at it. It's not the song anyway as it's a great piece of fuzz tone garage which has a bit of a Yardbirds feel to it. Or it could be that in 1966 this record just got lost as we know that was a particularly good year for garage rock singles. The version posted is for me the better version, the second one released on Romunda Records.

Kempy and the Guardians - Love At A Price
Posted by drew at 08:00

It's great! A perfect slice of energetic '66 fuzz garage and not even 2 mins long,love it.