A Bit More Garage From North Of The Border 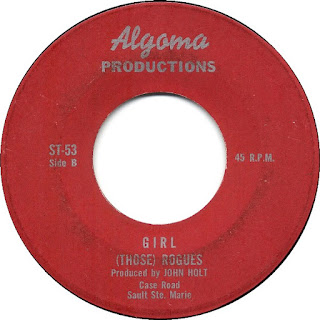 (Those) Rogues are the second Canadian band that I have featured in this Tuesday spot that was never intended to run as long as it has. I have surprised myself with the number of mid sixties garage rock records that I actually own, granted most of them are like a fair bit of my northern collection, pressings or re-releases. I realised years ago that I didn't have the wherewithal to be part of the OVO brigade so never developed the contempt for non kosher vinyl.

Back to (Those) Rogues, no I have no idea why the brackets, were from Sault Ste. Marie, Ontario and were active from 1964 to 1967. They only released the one single recorded in Toronto in ealry 1967 but had already committed to tape enough original tracks to make an album which sadly never saw the light of day. For me the better side of the single is the b-side, Girl.

Top notch, Drew, particularly the organ and drums. (Those) fellas deserved that album.

As Brian says, the keys and drums drive this one. Great stuff.