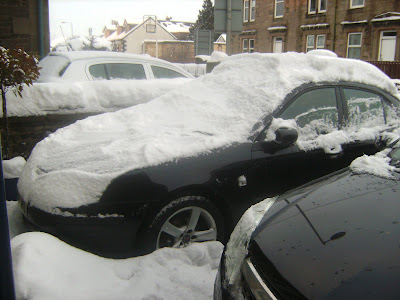 The weather up here is getting on my nerves now. I thought that by the time I would be going back to work all this white stuff would have disappeared. But it doesn't look as if it's going to thaw out any time this decade. I may be forced to dig the bloody car out of the drive tomorrow in time for Tuesday, however the fact that it hasn't even been turned over for a fortnight in these sub zero temperatures may provide other problems.

Still, I'm not going to think about it again until tomorrow. I think that a mug of hot Ribena is called for and just sit here for a while enjoying the silence. No more shaking of hands, wishing people I hardly know a happy New Year or making of idle chit chat to do. Absolute bliss.

After the silence, something a bit special. I've posted this before but for anybody who missed it and just because it has been running through my head for the last couple of days.

Much the same here in Yorkshire drew. Snow chains and crampons a-gogo.

Although the cold has been thawed appreciably this afternoon thanks to Leeds beating Man Utd. The city is banging - as the heads will be tomorrow I suspect. The weather will be a perfect excuse for those unable to move due to Cup Fever.

Always carry a shovel and a bar of Kendal Mint Cake ... even if travelling by public transport.

What a marvellous grump. I'm quite jealous.

Ctel - I have striven to turn grumpiness into an art form, or so the better half says.

your car will not start tomorrow amigo.