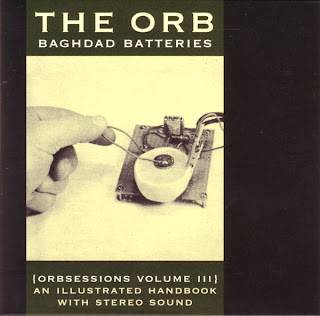 Here is a track from the recent album from everybody's favourite ambient collective.

I sort of lost track of The Orb after the Orblivion album, I think that I just got bored of that sort of music at the time and also I was compairing every release to Adventures Beyond The Ultraworld and nothing after wards quite made the grade in my opinion to that seminal album.

A couple of months ago I took a punt on the Orb's latest offering Baghdad Batteries, the third in a series of Orbsessions albums. although this is all new material not rare session tracks. The music is quite different from the early stuff but at the moment I'm really loving it. There is one problem with this, it now means that I will have to go back and fill in the gaps in my Orb collection now, which won't be cheap.

See what you think?

Email ThisBlogThis!Share to TwitterShare to FacebookShare to Pinterest
Labels: The Orb

I remember hearing Ultraworld at someone's flat and being blown away:
you could only buy it on vinyl at the time and it didn't leave my turntable for weeks: