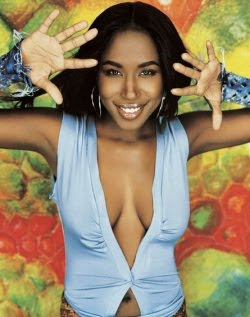 No, not that one.

Call Me was the second single from Tweet's debut album, Southern Hummingbird. The first single Oops (Oh My) was a huge single in America due in part to the guest vocals by Missy Elliot, whose producer Timbaland produced 4 tracks on the album including the first 2 singles.

I was not really a big fan of what the Americans call R&B then,  but bought Tweet's album on the strength of the 2 singles. I think that she has a great sultry voice and the album is better than I expected with only 2 or three of the 17 being filler.

She has released a further 2 albums with another planned for 2010, however can't tell you if they are any good or not as I didn't buy anything else after the first album, sort of forgot about her.