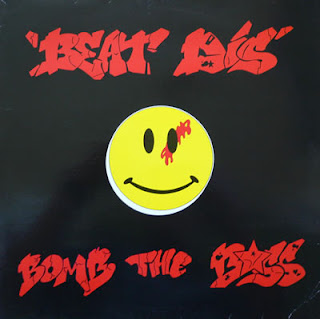 By 1987 I was getting increasingly interested in sample based music and Beat Dis fit the bill nicely.

The bass line and drum programming were original, composed by Tim Simenon, however the rest of the track was made from a collage of an alleged 72 samples, ranging from hip-hop and soul  to old film and TV dialogue. The record was reputedly recorded for 500 quid, not bad considering that it went on to end up #2 in the UK charts.

On the back of the success of the single Simenon ended up on the front cover of the NME, no mean feat for an emerging DJ, the first to be featured in a magazine which was very much a spotty indie kids mag which had been rather disparaging about house music and dance music in general in the past.

Twenty two years on it still sounds magic to me.

Email ThisBlogThis!Share to TwitterShare to FacebookShare to Pinterest
Labels: Bomb The Bass

Seminal record in acid house history. The 1st use of the 'smiley face', first successful 'cross-over' record to chart. The Sun even had a promo offer on smiley shirts around this time - about 6 months before acid house became national enemy number 1. Alas i was wrapped up in elitism and disregarded it as a daft chart song only later appreciating it for what it is.

looking forwards to more in this series. should be interesting.