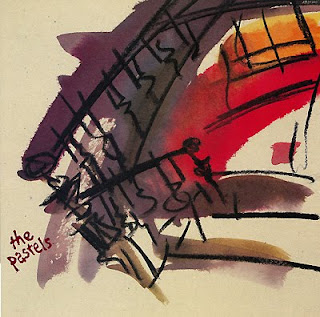 The first time I remember being aware of the Pastels was the first of June 1985 when they played at a Scottish Youth CND rally in the Kelvinhall in Glasgow, Strawberry Switchblade were also on the bill that day. I have to admit I wasn't that impressed with them, they were a shambles live, a view which hasn't changed over the years on the few occasions I have seen them. On vinyl, however I love their stuff, especially the output from 1986 to 1994.

Pastels have been around since 1982 and were built around the core members of Steven McRobbie, Aggi Wright and Katrina Mitchell, however quite a few members of the Scottish  indie mafia have lent a helping hand over the years for example Norman Blake, Francis McDonald and David Keegan.

The band released an album last year in collaboration with Japanese duo Tenniscoats called Two Sunsets on which there is a rather fine cover of About You, originally by the Jesus and Mary Chain amongst the original compositions.

Crawl babies was released as a single on Glass Records in 1987.

Pastels/Tenniscoats - About You
Posted by drew at 09:26

Email ThisBlogThis!Share to TwitterShare to FacebookShare to Pinterest
Labels: The Pastels

I've lost about a stone in weight chasing a crawling baby!

I know the feeling Simon, had to put up the gates to keep Leo in check last week. He does not like being fenced in.

Mine bites anything (or gums at least!!)that blocks his path. Including parents, shoes, tables, doors.