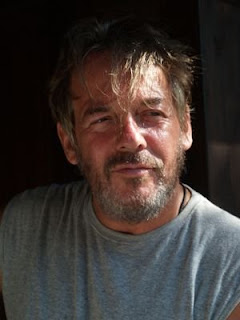 Until I was forty I didn't have a clue who Billy Franks was. Twenty three years previously I had heard a song of his which had left an impression on me but which through the years I had nearly forgotten about but not quite.  Every so often a snippet of the long forgotten song would get lodged in my brain and frustrate me for ages until I eventually forgot about it until the next time. If you are interested you can read the full story of my discovery of  what the song was and who was singing it here.

Last night through a tweet from Simon, of the much missed The Songs That People Sing blog I learned of the passing of Billy Franks a couple of weeks ago, far too soon aged only 60,  which saddened me greatly. I do not profess to being as familiar with the man's music as I should have been but people whose opinion I respect such as Simon, Davy H and Tony (DVD) rated him as a song writer and performer  and expressed such admiration for the man and the album I bought on the back of their recommendations, Eventide lived up to the hype which if you do not own you certainly need to rectify immediately.  I do wish that I had seen the man live, from all accounts it could be a deeply moving experience.

Although not the correct time of year it feels right and proper to post the song that was stuck in the back of my head for so many years.

The Faith Brothrs - Easter Parade
Posted by drew at 01:13

I know how much this song means to you. Sad indeed that he's died.

Hi to DVD if he's still out there reading our stuff.

I didn't knew him or any of his songs but reading your original post I can imagine what you feel about this song. It is a great one (another I missed). It is a very good tribute to him. May he rest in peace.

Second to that hello to DVD too.

Sad news. I remember hearing and getting the singles Country Of The Blind and A Stranger On Home Ground and then the Eventide album - all items that I played regularly during the mid to late 80s. Rediscovered his work via his website and some free live downloads in the early 2000s. Likewise I wish I'd seen him live. RIP.