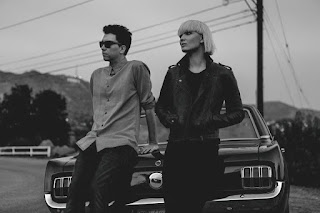 It's been a few years since I last saw the Raveonettes live. They haven't played these parts since December 2012 and it's not looking likely that they will be heading over the Atlantic any time soon, They are in the process of producing a new album which you can pre-order through Pledgemusic which entitles you to get a new track digitally each month. The songs are sounding good but not brilliant. I think that the duo's last consistently very good album was Pretty In Black way back in 2005 the five subsequent albums have had their moments some quite a few but none has had the impact on me that Pretty In Black did.

The Raveonettes - Sleepwalking
Posted by drew at 10:33