(I'm Not Your) Steppin Stone 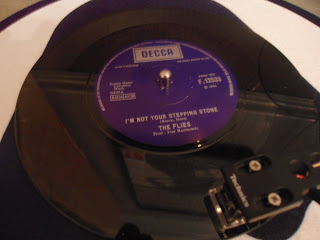 I am no longer sure which is my favourite version of Stepping Stone, it used to be The Monkees version and then when I eventually heard it, it was the disputed first recorded version by Paul Revere & The Raiders but at present I think it is the version by the English band "The Flies". 1966 was a busy time for recording and releasing this song all three versions above are from that year and also recorded that year was a version by The Liverpool Five and probably a whole load more. I think that if a song is good ten it is quite hard to really fuck it up, the Sex Pistols tried to do that with their version od Stepping Stone but even that one is not without merit as is the version from the Farm released in 1990. Which is a testament to the song writing skills of  Tommy Boyce and Bobby Hart. The only version which I have heard which was utter rubbish was by Minor Threat.

The Flies - (I'm Not Your )Stepping Stone

The Liverpool Five - (I'm Not Your) Stepping Stone
Posted by drew at 10:13

Totally new on me these versions. Looking forward to hearing them.

The Flies starts off all Hendrix doesn't it? It is very late 1960s too and rather splendid.

The Liverpool Five kind of sounds like the sort of version you'd hear on one of those compilation albums where licensing issues prevented the original band appearing. Not quite so enamoured with this one.

The Flies toured with Hendrix in 66/67 and also Pink Floyd. Funny you should say that about the Liverpool Five version JC as this is the other contender for the original.

I just can't get into the Minor Threat version Brian.

Played it last night. Not as good as I remember either.