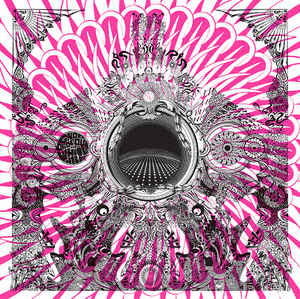 You might have guessed that I have a bit of a thing for long drawn out space /kraut type things. I think that this goes back to when I used to hang about with the older hippy types in my early teens who introduced me to things like Gong and Can and I realised that songs didn't have to be short, sharp and punchy. So over the years I have been rather partial to tunes on the more self-indulgent spectrum of music. To be honest, I find Gnod a bit hit or miss some of their stuff I love but other things I have bought listened to once, maybe given it a second go and then filed for posterity. The collaboration with White Hills, Drop Out With White Hills II, first released in 2010 is a record that I keep coming back to. The album feels like it is one long jam session (see even the hippy language is flooding back), and when I ripped the vinyl I didn't bother to separate the tracks but just recorded the sides in their entirety. I have posted side 1 (Phase 1 as it is titled) which consists of three tracks, the very short opener, Bits, the meat of the side,  Run-A-Round full of prominent bass, powerful drumming and repetition and then the come down at the end, Streams. The album is best listened to in one sitting and then if you have the time listened to again but who does these days.

Right up my street. Excellent stuff.

I can't get over, nor stop admiring, just how broad your tastes are and how you find the time to listen to so much.