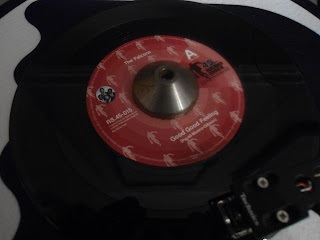 Here's a bit of soul from the source, It is hard to believe that this record is fifty years old. The Falcons were formed in Detroit in 1955 and had a couple of hit singles in 1959 with Just For Your Love and the following year with The Teacher, both Wilson Picket and Eddie Floyd were members of the group although I think that Sonny Monro is the lead vocalist on the 1966 Big Wheel release featured today but I could be wrong. Everything about this song oozes class from the instantly recognisable intro to the lead vocal, the absolutely bang on harmonies and the horns. Just magic.

At the risk of being labelled a pedant, I'd like to point out that the Falcons' 45 is 60 years old (61 to be strictly accurate) and not 50. It's probably cos it's Monday morning that you screwed it up.

*wanders off singing: "If I can help somebody as I pass along....then my living shall not be in vain"...

Yup, you're right. They didn't start charting til 1959. Monday morning obviously affected me more than you.