"I'm Never Gonna Sing Another Song I Don't Believe In" 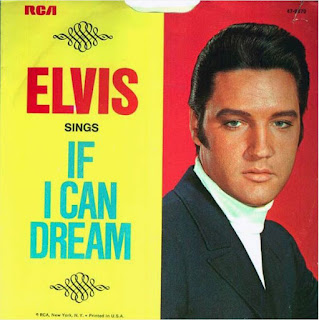 Pretty strong words which were uttered by Elvis when he was presented with the song "If I Can Dream" by  Walter Earl Brown as the song to finish  the Elvis' 68 Comeback Special for NBC TV.  The song was written by Brown after discussions with Elvis and his feelings at the deaths of Martin Luther King and Robert Kennedy earlier in the year, Tom Parker, Elvis's manager said that it wasn't an Elvis kind of song and wanted the finale of the show to be "I'll Be Home For Christmas" but Elvis got his way and when he recorded the song he reduced the backing singers to tears with the emotion that he put into the song .

The full quote was "I'm never gonna sing another song I don't believe in. I'm never gonna make another film I don't believe in" I'm not sure how true to this statement Elvis was, as surely he thought Mama Liked The Roses from the "From Elvis in Memphis" sessions was a piece of turgid sentimental pish as much as I do. I cannot comment on the final two films he made after the 68 Special, The Trouble With Girls or Change of Habit as I have never watched them but I suspect they were in much the same vein as most of the other films that he had made.