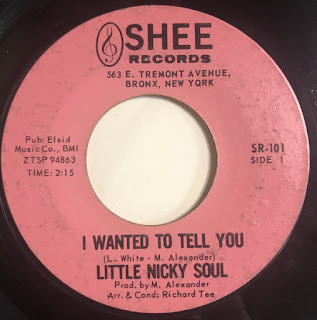 A lot of the tracks that become well known on the Northern Soul scene come from artists who little if anything is know of. It is a testament to the obsession of the collectors on the scene that they can't just leave it like that. A case in point is todays track, I Wanted To Tell You by Little Nicky Soul which I first heard as part of the For Millionaires Only Vol 4 and then on a repro 7". On the sleevenotes of the cd it states that the record comes out of the Bronx in NYC, possibly never received a full release and is described as "obscure and then some".

I decided to dig a little deeper and see if any further details could be found. there is a great thread on the Soul Source website, which can be found here, where more details about the record come to light, including the owners of the label, the arranger and even a post from a step-daughter of Nicholas Faircloth, for that turns out to be singer's name, where she tell of her father's stories of when he was in the music business which his kids all believed to be just that, stories. However, the now departed "Little Nicky Soul" brief sojourn into the music business has left us with one cracker of a single. It is just sad that he never knew how much his record is appreciated on the rare soul scene with a copy commanding at least a grand and a half.

Little Nicky Soul - I Wanted To Tell You

I can see why this one caught on with the gang. It has all of the elements of a floor filler... organ, handclaps, singalong lyrics. A little pricey though.