Here I Am Baby 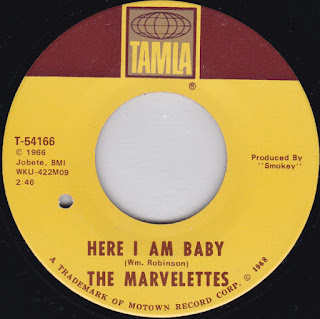 This is a magic bit of mid tempo Motown by the Marvelettes from the pen of Smokey Robinson. It was released in 1968. The song was originally recorded by Barbara McNair and released as a single three years prior to the Marvelettes version. Not sure quite which is my favourite what is not up for debate is that it is a very classy piece of soul. That's all I've got to say really.

The Marvelettes - Here I Am Baby

Oh my. This is might be better suited for Saturday night... not Tuesday morning at breakfast. Very good though.