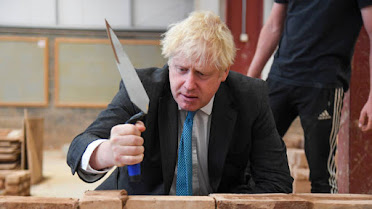 It feels like the Tory party are making it part of there mission to kill the performing arts. The cnut that is the Chancellor had the audacity to suggest that those whose careers were no longer "viable" should retrain, he wasn't helpful enough to suggest what somebody who had been a sound engineer for twenty years or theatre stage hands for years or any of the other s who have made careers in the Arts should turn their hands to. Not everybody has the old boys network or an incredibly rich father-in-law to fall back on or chums handing out government contracts but then again, to get one of those it helps to have seriously fucked up at least twice, be a dame, a relation of Winston Churchill's or somebody the not very good superforecaster met in Russia or was at school with.

I intended to go on a long rant about all the iniquities that are present in the UK but really, what is the fucking point, it's not going to achieve fuck all, it's just pissing in the wind, it doesn't even make me feel any better anymore.

Here is a song that came up on shuffle the other day and made me do one of those ironic little "huh" sounds that I increasingly make when listening to any news on the current situation reported on what is becoming the Government propaganda broadcasting company.

They are the biggest bunch of fuckers we've ever had the misfortune to be governed by. Cunts to a man and woman. Depressing beyond belief. What's really dismaying is the number of people who still intend to vote for them when polled. Despite everything, up to 40% of the population would vote them back in.

In some subtle and some not very subtle actions and incidents, our world is turning into the future that authors like Huxley, Orwell, Bradbury, Ballard, Chomsky and even Koontz have warned us about in their "fiction". Leaders of the western world are either puppets or proto-authoritarians, The press and free thinking are both under threat, economics are so abstract that leadership hasn't a clue how it relates to everyday lives. We get our news from political commentators rather than traditional new organizations. Leaders Tweet their platforms and agendas, in full knowledge that we won't scroll back to find them at their hypocritical worst. We stick our heads in the sand or shrug our shoulders under the impression we can't change anything. Our leaders are our enemies, we are our own enemies. We haven't seen anything yet.