Side One, Track One pt 5 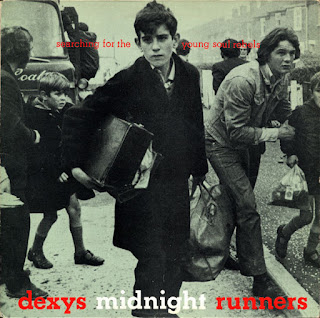 The sound of somebody turning the dial on the radio, interference, snippets of music and talk, followed by the statement "For God's sake burn it down" if that didn't get your attention then surely  the brass stabs that followed would definitely have you gripped for the next thirty nine minutes of Kevin Rowland's Dexy's Midnight Runners. Burn It Down, for that is the title of this opening track is a reworking of the band's first single Dance Stance which Rowland was not happy with. The song like many that would follow from the band dealt with loftier issues than just falling in love or dancing all night, although those subjects do appear on the album, on Burn It Down you Rowland rallies against ignorance of Irish culture and namechecks a list of Irish playwrights.

Dexys albeit in different forms would go on to produce another 4 albums during the subsequent 26 years, each one individual and brilliant, although not always thought so at the time, Don't Stand Me Down, anyone. Rowland I believe was not the easiest person to record with and had a singular vision for each of these records even down to the look of the band at each stage. Searching For The Young Soul Rebels certainly pointed the way and those opening words definitely appear to have been a manifesto of sorts.

Dexy's Midnight Runners - Burn It Down

I'm 48 and me and my pals all loved Dexy's but less so than, say, Madness and Adam & the Ants (we were young). But I think this is the album that I've got most copies of (3) because wherever I've been over the years I've always had to have a copy of it to hand. Not that arsed about the other stuff, I'll never get rid of Too Rye Ay but I might have flogged a nice copy of Don't Stand Me Down (didn't get it, despite all the Pete Paphides articles). You don't have to be massivey into them to twig that Kevin Rowland could be a bit of a dick but I remember being truly impressed by his apology to Kevin Archer.

Yep, a really strong statement to open an album with.

Certainly the superior version. It is simply one of the best album openers of all time. Searching For The Youn Soul Rebels is on my list of required 80s abums. The statement Rowland was making starts with the album cover and just continues with each track.

You're in a tough position for next week because bettering No. 5 will be nearly impossible.

Artog is missing out on Don't Stand Me Down, but I agree with him that Rowland feels remorse about how things went down with Archer.