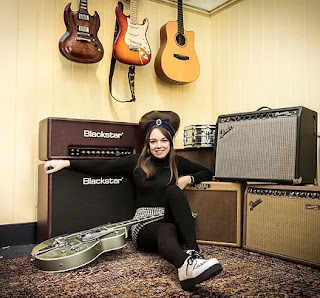 I had never even heard of Emily Cappell until a few weeks ago when on Twitter somebody posted possibly the worst cover version this side of Michael Bolton's travesty of a cover of the Otis Redding posthumous classic (Sittin' On) The Dock of The Bay. It was Miley Cyrus attempting Heart of Glass and somebody posted the Youtube clip below to show how a Blondie cover should be done. Which had me searching the internet for more music by this obviously extremely talented young woman. It turns out that she has been making music for 10 years, I really am getting later to the party as I get older and has released one album, Combat Frock, with a title like that it must be good, right? Yes it is very good with witty, sharp lyrics, the music a mixture of poppy punk, ska and some good old fashioned Rock n Roll. Lots to like. With influences from Dolly Parton to Joe Strummer that can be found on this cd that is also a lot of fun. The final track Ode To Uncle Moz is so on the nose.

Most enjoyable. I will avoid that other cover.