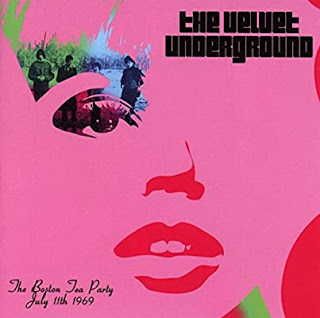 We're back to the source of a lot of the music in my record collection today with another track from The Velvet Underground. "What another one?" I hear you cry, yes but with a slight twist this time in that it does not come from the Complete Matrix Tapes, so if you are trying to compile the entire release from postings on this blog you will have to wait a while longer as today's track comes from one of the four bootlegs of performances by the band that I possess recorded at The Boston Tea Party, a venue that they seemed to enjoy playing with Lou Reed stating that it was their favourite place to play.

Their first gig at the club located at 53 Berkeley Street was in May 1967 and they returned many times for several nights at a time. After the replacement of John Cale with Doug Yule in late 1968 the new line up played the Tea Party from the 12th to the 14th December that year and returned again in January, March, May and July of 1969 and luckily for us several of these shows were recorded, I have bootlegs of the 12/12/68, 10/01/69, 13//3/69 and 11/07/1969 shows. These recordings aren't the best audio quality in the world as they are obviously crowd recordings using the technology of the time but they are all ten times better than some of the dodgy tapes that I used to buy at the Barras in the late 80s early 90s. No matter the fidelity of the original tapes which have been remastered somewhat for these less than legal releases,  the tightness and power off the band burst through, not least on this blistering rendition recorded on the 11th January 1969,  one of the best tracks from the band's debut album from three years before. You can tell that this is a band at the height of their powers as all the members have said during interviews over the years of their live peformances in 1969.

If you listen very carefully you may just hear the sound of Jonathan Richman taking notes in the corner as he was omnipresent at these gigs.

The Velvet Underground - Run Run Run
Posted by drew at 11:13

You can never have too much Velvets.

"...so if you are trying to compile the entire release from postings on this blog you will have to wait a while longer..."

Ha! Guilty as charged. Wow! Four shows from the Tea Party residency alone. Your VU collection must be something to behold. I have always felt the VU lineup from the later years has been treated much too harshly by music snobs. There were some great songs in there.