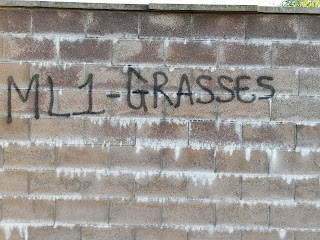 Day one in part two of Dominic Cummings experiment with "herd immunity" in England. Are you ready for your child to be a lab rat? I am livid and I am not even affected by the changes so can only imagine how a lot of people down south are feeling right now when you are being asked to "just get on with it" for the sake of commerce when the infection rate is still higher than when we went into lockdown.

I realise that things have to get going  but I fail to see the point of opening Nandos if it results in a spike of cases and people being too ill to eat the damned stuff. But you will still be able to "spaff" whatever money you do have left at the online bookies and make more money for gambling companies and Baroness  Dido Harding, board member of the Jockey Club and Cheltenham Racecourse, who was in charge of Talk Talk when a data breech occurred resulting in the accessing of 4 million customers personal and banking details by criminals, who is now in charge of the government's  (World Beating*)Track, Test and Trace operation and did I mention the fact that her husband is a Tory MP and her father is the 2nd Baron of Petherton, certainly not a member of any elite then. Oh, and when we are on the Track and Trace thing, the contract was given without tender to SERCO, who were previously fined £19.2 million for fraudulent accounting in relation to the electronic tagging service for the Ministry of Justice and who only a fortnight ago accidentally shared the email addresses of 300 of the people they have employed to perform COVID-19 contract tracing. The CEO just by coincidence happens to be Rupert Soames, brother to ex Conservative MP Nicholas Soames and grandson to Bawjaws hero, Churchill, so again certainly not part of the establishment or elite by any stretch of the imagination. I could go into the dodgy organisations behind the track and trace app but I fear if I typed any more of this there would be a high probability of the laptop being launched out of the very small window in front of me. If you are interested you could look here for a start.

*"World Beating" in the same sense as the UK has the highest number of deaths from Covid-19 by % of the population in the entire world. Tremendous, makes you so proud doesn't it, British Exceptionalism at it's worst.

Anyway, none of that was intended for today's post.

I was out on the bike the other night doing my bit of exercise and this track came on the iPod,  I stopped peddling,  got off the bike,  sat in the fading sun and just listened. One of my favourite things about going to see Greg Dulli in his many incarnations is trying to name the song that the familiar lyrics are from that he randomly drops into some of his own compositions, a bit of the Beatles here, a smattering of Fleetwood Mac there and some Prince or a frustratingly familiar couple of lines from a soul classic elsewhere.  It keeps you on your toes, helps you stay alert, if you will. So listening to this song brought back happy memories of hearing it in this form in Glasgow in July 2014 and it taking me a good 90 seconds to get the song. But then I started to get quite sad as the gig was at the ABC,  the venue next to the Glasgow School of Art which was also extensively damaged in the last fire and is now going to be pulled down as it is not worth saving and just to compile my anguish I was reminded that I was supposed to be seeing Greg Dulli promoting his latest album, Random Desire in March, the first of three gigs that I had lined up that have now been cancelled!

The "establishment" looking our for themselves and their chronies.
Wh owould have thunk it?

I agree with everything you said,apart from The Afghan Whigs. They are another band I've known of for years, but just don't know their stuff.