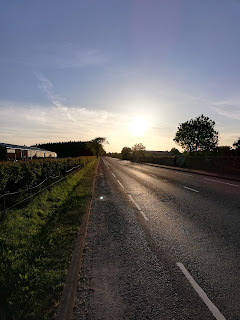 The last gig I saw before lockdown was a rather emotional one, I think in no small part to the realisation that I suspect everybody in the Royal Concert Hall that night for King Creosote and his 9 piece band's performance of From Scotland With Love had  that this was going to be everybody's last night out for quite some time, although I'm not sure that anybody present quite understood to the extent of the changes to life  that were about to happen. This feeling of the unknown ahead of us, coupled with the beautiful but very emotional images and music that evening meant that on the drive home to Lanark,  Lynn and I both felt as if we had been through the emotional ringer, in a good way of course but drained and contemplative.
I'm not sure what it is in Kenny Anderson's music and lyrics but even when at his bleakest there is still a glint of hope somewhere deep within the song, whether that be a hopeful chord sequence, a clever lyric, an added snippet of conversation or just that soothing Fifers lilt. I think that I have listened to at least one King Creosote song if not every day then certainly every other day since we have been confined to home apart from when we take our daily exercise or go shopping for essentials.
Today's song has been played quite often, not an Anderson composition,  it was written by Lomond (Ziggy) Campbell long time friend and collaborator of KCs who used to be one part of the collective Found. The Lengths, is also Ziggy's home at the side of a remote Loch in the Highlands it was originally a school that had been closed and was derelict until Campbell renovated it. You can see it and hear about it here. King Creosote's version of the song that the house takes it 's name from was released as a 7" single on Triassic Tusk records in 2017. It was the third in a series of releases in that format that would feature an original and a cover of a song by the next artist in the series and limited to 300 copies
King Creosote - The Lengths
Posted by drew at 10:42

Going to gigs seems a very long time ago now. And very far away too.

My last gig was A Winged Victory For The Sullen,March 1st. It seems a long time ago,I'd really love to go to a gig.

Beautiful song, Drew. I miss the shows too.

I went to Tove Lo in Manchester on March 10th, the week before the lockdown (or the week everyone started to observe it unofficially and shame Johnson into doing something) and yeah, I guess that's it for the next while. Hardly a reflective, elegiac gig to close with unlike KC, more of an exuberant closing ceremony.