Yes, It's That Time 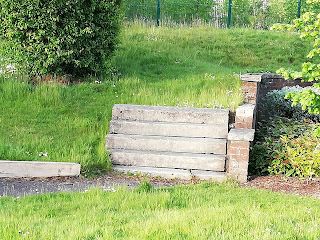 One of Leo's favourite bits when we're out on our bikes is when we go up by Dead Man's Lane, it runs parallel to the cemetery wall, follow the path round the new high school, down Kirklands Road, loop round Albany Drive and back home. I think it's his favourite part as he knows he's nearly home and can get back to his PS4.
Those steps in the picture above are all that remains of the path way from the main building of the old school, the one that I attended. They were on the corner of the path across from the PE department that continued round the corner up by "the huts" and the ash football pitch to the extension built in the 1960s that housed the Modern Languages, Arts and "Techie" departments. They were steps to a tennis court that had fallen into disrepair and had never been used in the whole 6 years that I attended the Grammar (not a Grammar school by the way). I spent a lot of time sitting on those steps or the wall beside it waiting for pals in different classes at break times or lunch, well until 5th year when I started smoking and then I spent my break times with the other smokers down at the bottom of Kirklands Road. The steps would also be the place where I would meet my girlfriend during 5th and 6th year anytime we were meeting up during school hours. 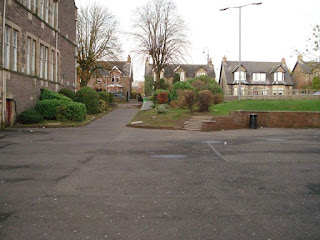 A week or so ago when we were doing the loop back to the house Leo rode up into the parking area for the new school where the gym hall was. He stopped and asked me what the steps were for and suddenly an overwhelming wave of nostalgic melancholy crashed over me as I described the positioning of the three buildings of the Grammar and the huts and the logistics of moving between the separate parts during the day. I sighed, looked at the load of rubble that is all that's left of the Main Building and was lost in contemplation for a couple of minutes. We got back on our bikes after I noticed the funny looks I was getting from the boy,  rode down to the end of the road, hung a right onto Braxfield Road and then after a hundred yards or so took another right with the old Science Building on our left onto Albany Drive past the remains of the Main Building again now on our other side,  took a left crossed Hyndford Road and then we were back at the house. Running through my head all the way back from the stop at the steps were the words and music to my favourite Jonathan Richman song, well it couldn't really be anything else could it.
Getting old really is a bastard.
Jonathan Richman - That Summer Feeling (Extended version)
Jonathan Richman - That Summer Feeling (single version)
Posted by drew at 08:00

Looks out shorts and sun cream
It is now Official

This- 'an overwhelming wave of nostalgic melancholy crashed over me'-
keeps happening to me too.

As CC said, the season has now begun. This was a very good read and quite a photo too. Can relate to the sentiment.

A tremendous piece of writing.......and you try to pass yourself off as a miserable, cantankerous and unsentimental old bugger. Some of us know you that wee bit better.

One day, Leo will think back to that particular day and recall just how amazing his old man really was.