You Had Me Fooled 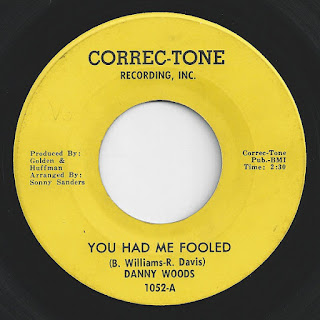 The northern soul has been a bit thin on the ground around these parts of late a situation I intend to rectify in the coming weeks.

First up then is You Had Me Fooled the debut single from  Danny Wood, released on the Correc-Tone label in 1965 and you won't be surprised to learn that this record is from the Motor City. Wood later found fame when he joined Chairmen of The Board but not before releasing another 6 singles that failed to set the heather on fire at the time, Today a copy of You Had Me fooled, if you could find one would cost around £300.