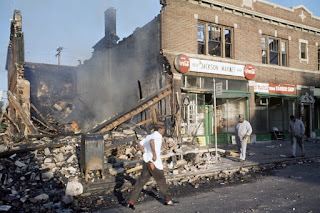 This isn't the version of this tune that I was going to post today but I realised too late last might that I hadn't ripped the original version of 1960 What. This is something I have noticed a lot this weekend as I was going to do a garage/psych compilation on Saturday but half of the tracks that I wanted to include weren't in iTunes or on the Rips1 folder either.

Anyway, the lyrics of 1960 What relate to the death of Martin Luther King Jr in Memphis and of the riots in Detroit but I'm not sure if this refers to the major riots of the summer of 1967 when 42 people were killed. 1189 were injured and over 7000 people arrested or the riots that took place after the assassination of Dr King which not only took place in Detroit but many of the major cities in the USA. The lyrics convey the despondency that must have been felt by all black Americans in the racism and turmoil of the late 60s America.

The mix posted is by the Italian musician Geraldo Frisina that came out in a limited pressing a few months after the original and I was lucky to get my hands on it.  It isn't earth shatteringly different from the original but is a bit bouncier and latin tinged. There is a further slightly shorter "re-rub" by Swedish producer Opolopo which is even more dancefloor focused.