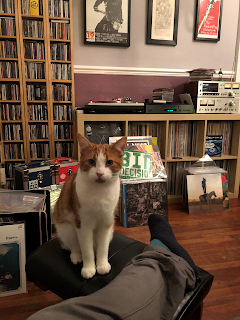 I know that there are a lot worse things happening in the world than the death of a pet. Jez over at A History of Dubious Taste is mourning the death of his little brother, Llyr, for one. But I feel that I need to record and acknowledge somewhere the life and death of Luca as it has had more of an affect upon me than I imagined it would have done, if I had imagined the prospect at all. I keep telling myself, he was only a cat and he wasn't here for that long, pull yourself together. I suspect this is the reason it took me so long to come round to the idea of having more pets after Baxter's final trip to the vet a little over four years ago. But last Monday just after three pm Luca was killed right outside the house after being struck by some vehicle or other. Only minutes before I arrived back with Leo from school. Luckily for us but not for L she had just returned from a funeral just before us.

When I think about it, it was inevitable just the previous morning as I was coming back from getting the Sunday paper  I had to roar at him as he shot across the road when he saw me and followed me back to the house leaping over the walls of the front gardens of the three houses on the way home. Out of our back there are loads of gardens, the extensive chapel grounds and quieter streets but ever since he and his brother could get out,  there was something that attracted him over that busy main road. I hoped that in time he would lose interest or get the road sense that the previous two cats had but it was not to be. He was always reckless, last summer Lynn called me out the back to point him out up on top of next door's roof on the chimney stack being divebombed by pigeons. He had jumped from the garage onto the pitched roof and climbed up to get at them.

He was Leo's cat, if a cat ever really belongs to anyone. Leo was the one that picked him out from the other 12 kittens only 18 months ago, gave him the most attention and fussed over him. Luca was always a bit more aloof with the rest of us, he may have wanted petting but you would be the one that would have to go to him, that was unless you were Leo in which case he plonked himself down either beside you or on your lap.  It is heartbreaking to watch a ten year old grieve for his pet and his "best friend who always cheered me up if I was feeling down or not well". I have been told that it's all part of life for a child but I was hoping he wouldn't have to deal with this for a good few years yet. It was also a first for me as I never had to dig a hole in the garden before and bury a beloved pet, that was my dad's job but that's me now I suppose.

Anyway, farewell Luca you were much loved and brought a lot of joy in your short time with us, especially to one small boy and his dad if I'm being truthful. You are and will continue to be missed not least by your brother (Hugo) who is a bit lost at the moment.

Sad to hear about your loss Drew. It is always hard when a member of the family passes away. I remember how I felt when my little dog died a few years ago and the emptiness he left behind

Sorry Drew. They always leave a hole when They Go.

Even though Luca's life was cut short, it sounds like he had a nice life while he was here. Sorry for your loss. Having lost our Lily and Sadie through the years, I feel nothing but empathy.

Sorry to read this, Drew! I know how you feel, and, perhaps even worse, I know how Leo must feel, poor guy!

One of the finest tributes to a pet that I have ever read.
Much love
Badger

A moving piece of writing. Thanks

I haven't been here for a while, sorry.
As someone who has 8 or more cats roaming in the garden as of now, I can deeply symphatize. One of them, Codone (Big Tail), has disappeared last summer and my wife and daughter are still mot over him.
A ciao to Luca from Luca.