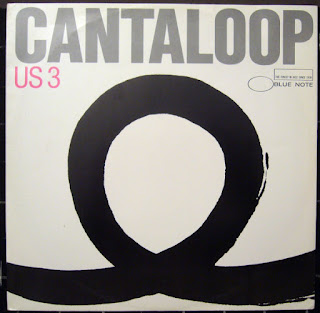 I had forgotten how much I loved the first Us3 album until I dug it out the other week for a change. It was like a breath of fresh air, albeit fresh air that is twenty six years old (ffs!) but not at all fusty, I have played the album a few times since and when I decided to post something from it, it became increasingly difficult. There was a thing for jazz influenced hip-hop at this time  and this album is one of the best with it's extensive use of Blue Note samples, don't ask me what they all are, I'm no expert but according to everything I read at the time the tracks on Hand On The Torch is loaded with them. But I have gone for the first track which was also the first single, Cantaloop which liberally samples Herbie Hancock's 1964 track Cantaloupe Island. The single was released twice in the UK, first time round in 1992 hardly anybody noticed it the rerelease the following year saw it get to a respectable number 23 in the charts.

and the Herbie Hancock track

Terrific stuff. The success of Us3 created a little spike in original Blue Note sales at the time, which was gratifying to see. 'Empyrean Isles' is an excellent LP, featuring a stellar line-up including one of the greatest drummers in jazz, Tony Williams.