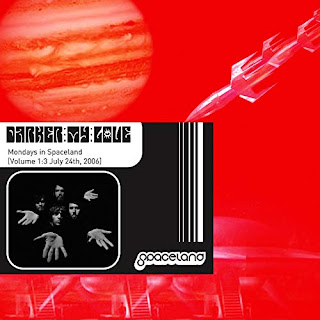 Today's long song comes courtesy of the band that MES plundered for musicians to replace the "traitors, liars and cunts" that left him and Eleni mid way through an American tour, Darker My Love. I don't know the story of how he co-opted Tim Presley (guitar) and Rob Barbato (bass) along with drummer Orpheo McCord into the Fall but he did and brought the musicians back to Britain where I was lucky enough to see them a few times live and they also recorded very good late period Fall record. Today's track is from a set of gigs that Darker MY Love performed during July after the Fall USA tour had been concluded and a couple of weeks before "the dudes" as Smith referred to the Americans as joined the Fall in the UK  to continue the planned dates over here The nights were recorded and released on cd, three of which contain absolutely blistering cover's of Can's Mother Sky, it was a difficult job to pick a version to post today as they are all equally as powerful but I think the the one posted illustrates the incredible sounds that Presley can get out of a guitar and the power of Barbato's bass which both enhanced the sound of the Fall hugely for the brief period when they were in the band and also shaped the future sound that they would take. However there was no way that Tim Presley would have lasted long in the Fall, as he was partial of doing that rockist thing of soloing and looking like a lead guitarist thing that Smith highly disapproved of but jeez, he was good.

Box does not seem to want to upload my music at present so you will have to make do with the YouTube clip, sorry.

Blimey, this is great. I've come to this straight from The Orb over at SA's place and it's certainly blown the cobwebs away. Falls neatly into the 'thoroughly splendid racket' category.