You Better Think It Over 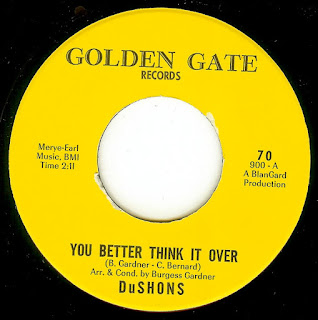 Today's piece of soul come from Chicago and was first released in 1965 on Golden Gate Records but it sounds like it came straight off of the production line in Detroit and to me is very reminiscent of Nowhere To Run from the same year. I know absolutely nothing about the DuShons but somebody must have rated this track as it was re-released on Down To Earth records in 1970 and was then bootlegged. I love this kind of girl group thing.

The DuShons - You Better Think It Over
Posted by drew at 08:00

Worth it for the first 20 seconds alone, as each instrument introduces itself - magical. Very 'Nowhere to Run' in structure as you say, but what a terrific sound.