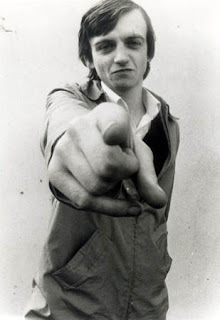 I hadn't listened to Perverted By Language  in ages and had sort of forgotten just how brilliant and original album it is. Nobody else sounded like the gruppe sounded back in 1983. This was the Fall's 6th studio album and the first to feature Brix Smith but due to the fact that the majority of the album was recorded prior to her joining the group it isn't quite as, for want of a better word, accessible as the next few albums would be. I don't think there is a bad track on the record but one  for me towers above the rest and that is Garden. I have no idea what Smith is going on about in the song and don't really want to know but the repetitive nature of the music always sucks me in and if it went on for a further ten minutes it would still grip my attention. I have stated before and I know that quite a few disagree with me, but the Peel session versions of Fall tracks tend to be superior and that is no different here it feels fresher and is over a minute longer. It comes from the 6th session broadcast on 23/03/83.

"over a minute longer" and he says that like it's a good thing!

it wouldn't be a Fall post without a good grumble from Acid Ted... Great track though!!