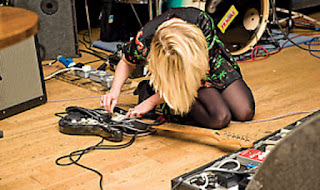 I had nearly forgotten about this mob until I saw a poster for the upcoming gig at the Wah Wah Hut next Thursday when there seeing Greg Dulli, which alas I will not be able to attend due to being stuck in the north east of England. Which really is a pity as they are excellent live. Ritzy the guitarist and singer is a bit of a nutter. The music is all crashing drums huge bass lines and lots of lovely feedback. This live version of second single Whirring recorded at Koko in London is included on the Big More ep and along with the Youtube clip from a performance for KEXP illustrated my point perfectly.

Kind of lost track of them after this, but this song is still as good as the first time I heard it.