She Got Me Spinning From The Beginning 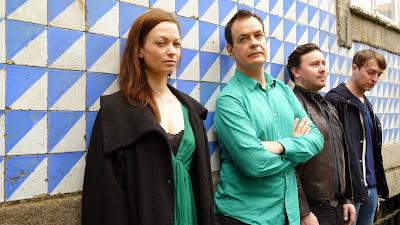 Last Friday Stiff and I attended another near perfect performance from the Wedding Present. With the exception of 2009 I have seen the band every year since 2006 and they have never disappointed. You get 90 minutes of full on guitar thrashing, bitter sweet love songs a bit of banter and you go home happy in the knowledge that you have seen a band who have enjoyed themselves as much as you and have given their all. I also love the fact that you don't get a greatest hits type gig either. I heard a couple of people moaning at the end that they didn't get "all the best ones" not sure how many WP gigs they have attended before as this

I have one small niggle and that is that I am getting tired of the playing an album in its entirety from start to finish. I quite like not knowing what is coming next. Last week's performance didn't feel so much like that as it was the Hit Parade album, which wasn't originally an album in any case but twelve singles, one released each month in 1992, but on hearing the first chords of Blue Eyes you know exactly the order of the next eleven tracks to be played.

Gedge put out a question on Twitter to find out which was the favourite of the twelve singles released in 1992 and I wasn't surprised when he informed us that it was July's offering Flying Saucer. Posted is the Peel Session of the track.

If you like the music of the Wedding Present but have never had the good fortune to experience them live, check out Scopitones and buy tickets when they are next touring near you. I guarantee you will not be disappointed

The Wedding Present - Flying Saucer
Posted by drew at 07:00

I saw them on the Tuesday in Wolverhampton. I was a bit put off by the new eye candy Katherine Wallinger on bass, very nice.