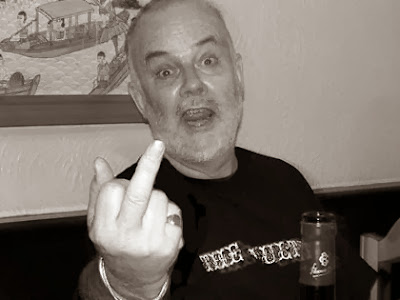 Why should we continue to celebrate John Peel, some may ask?

In my experience this kind of person tends to be someone who uses music as background noise or listens to what they hear on Radio 1 or the many commercial stations where you hear more ads than songs. The kind of person who music just isn't that important to.

I'm not pouring scorn on such people, it's just they have different priorities to me.  If I wasn't ever so slightly obsessed with music I would probably be a lot better off, so who is the mug?

For me the reason to celebrate the life of John Peel is to say thanks for introducing me to some of the most glorious music I have ever heard as well as subjecting my ears to some of the worst pish it has been my misfortune to hear but so much more of the former. He is also partly responsible for me being skint about two weeks into each month as I buy records that I suppose I could live without but which make life that little bit better when put on the turntable as if it wasn't for him I would probably not keep seeking out new music.

It is said that it has taken a whole station to take the place of Peel which is partly true, however I think that 6Music isn't as diverse as it likes to think it is and I believe that I heard more varied music on his shows during the week than I do listening to three or four times the amount of time on 6Music.

Here is a session from one of the later genre's of music that Peel championed which probably alienated a lot of indie kids as punk and reggae had earlier listeners. Plastikman is the alter ego of Canadian Ritchie Hawtin who has produced some of the most minimalistic yet exciting techno since the early 90s. He performed three live DJ sets for Peel at the beginning of the noughties and recorded one session on the 14/7/94 which was aired on 16/09/94.

Have a good weekend people. Fittingly I'm off to see the "boy Gedge" tonight.

Peel was a huge influence on my current collection and listening. Also Annie Nightingale too - she played some belters on her Sunday night show

Wise words to about how to consume radio these days Drew. I listened seldom to John Peel because the radio transmission transfer was only two times a week and between 2 and 4 a.m. but I know very well about the the importance of him for today's music.

Have a fine weekend.
Cheers, Walter

Top stuff Drew.
Have to agree with you about 6Music. I've been listening all day and it's not very "Peelie", more mainstream. Dandelion Radio is the only one that keeps the spirit.

Gideon Coe's programme is rather wonderful, I think. And Cerys on Sunday mornings.

Never mind all this though, what happened in Lochearnhaed? Were the grouse lively, etc?

Well put re John, and the people who seem not to be captured by music.

His son does a pretty good job of emulating his father I think with his show (of course he even sounds like his father). After listening to Tom's show it sort of highlights that most of the rest of 6music is pretty mainstream by comparison. Although I agree with DavyH that Gid Coe's show is required listening, and I am getting quite obsessed with it lately (although he could slip in more soul and reggae). It helps too I think that, like Peel, Gid has a very engaging speaking voice.

He does! I love his voice. It takes a lot of practice to sound that natural.

It rained in Lochearnhead Mr H, when I say rained I mean fucking poured down.