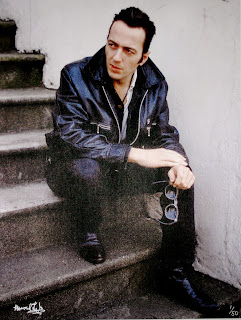 On Sunday 6Music in the UK had a pretty special edition of Cerys' show which was made up with interviews with the three surviving members of the Clash and their first tour manager Johnny Green, interspersed with music by the band, originals of songs that they had covered and the sounds that influenced them. This was radio at it's best. You will find it here if you missed it.

One of the tracks played was from the first Joe Strummer and the Mescaleros album, Rock Art And The X-Ray Style which to my shame I had totally forgotten about. Not sure why because at the time I think that I included it on every compilation tape I made for about 6 months. I think that what really appealed to me was the world weary feel of the track. Since Sunday I must have played it about a dozen times and it really fit my mood yesterday when sitting at the side of the M61 waiting for the AA to come and tell me that my car was fucked and would not be getting me back home to Lanark!

Joe Strummer & The Mescaleros - Nitcomb
Posted by drew at 11:12

I love this song, most of the lp in fact. It was a good show too. Hope the car's not completely fucked.

It was indeed splendid radio - and I too was reminded of the grooviness of this track.

Sorry to hear about the motor. Did you thwack at it with a stick like Basil Fawlty?

I think that this could be quite serious, if the drive belt is the same as a timing belt!!!