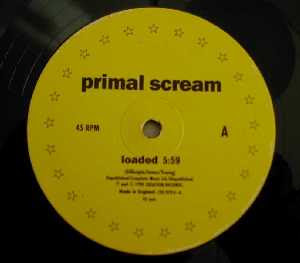 I happened to be in the West End of the toon yesterday on business and decided to have a wee root through the boxes in Oxfam music on Byres Road and among a few quite decent, cheap twelves which I procured was a mint copy of the Terry Farley mix of Loaded for a quid, I already have a copy but it has seen quite a few parties and has seen better days so didn't have to think long and hard about whether to purchase or not.

Very similar to the Weatherall mix, pretty hard to better perfection, it is about a minute shorter and with more of the vocal from I'm Losing More Than I Ever Had.

Loaded will always be in my top ten tracks and reminds me of a Friday in 1990 when I first took it to a mate's house to let him hear it. When I told him he had to hear the latest by Primal Scream he told me to fuck off. After the initial play the 12" took up residence on his turntable for the next couple of weeks. Not many tracks have that effect on us these days.

"When I told him he had to hear the latest by Primal Scream he told me to fuck off."

Ha! That made me laugh.

Don't want to moan... (but here goes!)..I've just downloaded Come Together rather than Loaded!

Andrew - I will sort that out when i get home tonight.

The best version of a classic track!