Side One, Track One pt1 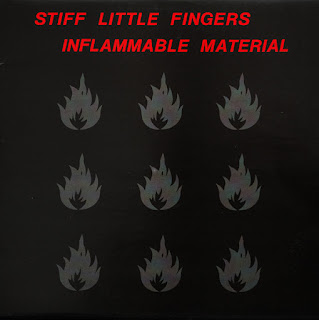 During my period of inactivity on the blog I was trying to come up with some new ideas to try and put some life back into the blog and freshen up the content something that on the evidence so far I have been unable to achieve. I have however decided to revive something I did think about doing years ago, I can't actually remember when it was but I think it was when I posted a song that just happened to be the first track on side one of a debut album and I pondered whether this could be a feature. It probably wasn't even my idea originally and I stole it from someone else's blog, if so I apologise.

So I am going to start with a song that for me is the ultimate statement of intent and distilled into 2:36 the essence of the band, well until the release of the third album released two years later.

It is probably not in the best possible taste to describe a track that deals with what is known as "The Troubles" in Northern Ireland as incendiary but I can't think of another word or after checked an online thesaurus a more apt word for it. I can still remember the first time I heard this track in Kevin Corkhill's house not long after the single came out, almost certainly the re-release and the rawness of it made me sit up and take notice but as a 9/10 year old I really wasn't aware what the guy I would later find out to be Jake Burns was singing about but I knew he meant it (man) and was angry about it. This single made me sit up and take notice of  Stiff Little Fingers and about 6 months later I would get a second hand copy of Alternative Ulster, the single that has been with me the longest. But it wasn't until I moved to Lanark, started P7 and met Stiff that I heard Inflammable Material in full, an absolutely incredible album from start to finish which can hold it's own against the best debut albums but is very rarely cited in discussions or polls on such important matters. I mean it contains today's track, Wasted Life the afore mentioned Alternative Ulster and the best cover of a Bob Marley song ever and that's only four of the tthirteen  tracks.

Although the album version isn't quite as raw as the single one, as I said above there can't be many other opening tracks on debut albums that grab you roughly and forcefully tell you what you are going to experience over the forthcoming  two sides of vinyl.

One of the great opening tracks from one of the great debut albums. We used to go to an under 18's disco in East Kilbride in the early 80's and we used to take this and Hersham Boys along with us for the DJ to play for us.

That is one mighty debut - my only issue with it is I could happily lose the final track ("Closed Groove").
By the time of their 3rd album, the band were deliberately trying to move on - unfortunately some of their core audience didn't move on with them, and they split in 1983.
Reforming in 1987, they have got stronger - their last album ('No Going Back') is every bit as powerful as the debut, but now with added experience.

The name my be a clue, but if you ever want to be "entertained" by a history of the band (with pictures and a powerpoint presentation) I'm available for weddings, birthdays and bar mitzvahs at reasonable rates

Another Album 1, Side 1, Track 1 - which is basically a manifesto - is Oasis "Rock n Roll Star" (from 'Definitely Maybe')

Ooh, this is going to be fun. Great start, Drew. Now, if only my ears stop bleeding. Big hello to you as well, Scott. Hope you are well.

Excellent choice for a series Drew! And what a great choice to get the party started!

New Order with 'Dreams Never End' was a belter, even if the rest of the album didn't really live up to it.

Oddly I was thinking about this concept the other day, before seeing this, after putting on The Cure's Kiss Me x3 which I hadn't heard in perhaps 30 years and being blown away by the opening title track. The rest of it passed by in a blur and there was too much of it, but those guitars.

All good here thanks Brian, hope all is good with you.

A great idea for a series Drew - and what an excellent tune to start with. I'm still particularly partial to SLF's first two LPs.