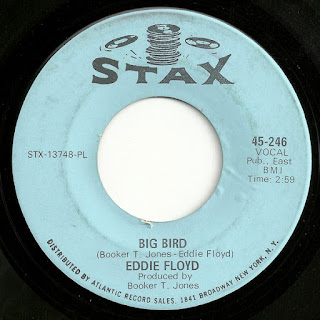 Eddie Floyd is probably best known for his 1966 #1 single in the US Knock on Wood, however my favourite by the Stax artist has to be a single that came out two years later, Big Bird. The backing band on the track includes the regular Stax/Volt Rhythm section of  Booker T Jones, Steve Cropper & Donald Duck Dunn and also the Memphis Horns.

The song was written as a result of a delay at Heathrow airport when Floyd was waiting for a flight back to the States so that Floyd could attend the funeral of his friend and label mate Otis Redding. Making the pleading tone in the singer's voice pretty poignant.

Beefed up soul - love it!

Yes, better than Knock on Wood, and this version gives the original a nice little punch without mucking it up. Perfect.